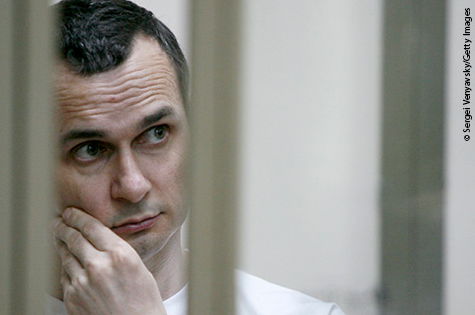 Ukrainian film director Oleg Sentsov is the 2018 winner of the European Parliament Sakharov Prize for Freedom of Thought.
Sentsov has been sentenced to 20 years in prison for “plotting terrorist acts” against the Russian “de facto” rule in Crimea. Amnesty International has described the court process as “an unfair trial before a military court”.
He has become a symbol for the approximately 70 Ukrainian citizens illegally arrested and given long prison sentences by the Russian occupation forces in the Crimean peninsula.
The prize, consisting of a certificate and €50,000 will be awarded during a ceremony in the Parliament in Strasbourg on 12 December.

The Sakharov Prize for Freedom of Thought, named in honour of the Soviet physicist and political dissident Andrei Sakharov, has been awarded annually since 1988 to individuals and organisations defending human rights and fundamental freedoms. This year marks the 30th anniversary of the prize.